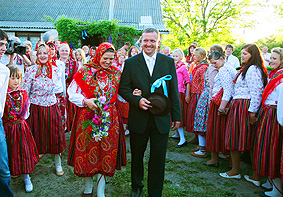 Kihnu folk culture and traditions find their most complex and bright expression through the very special Kihnu wedding ceremony where most Kihnu customs, dances and songs are demonstrated along with young women’s handicraft skills. It involves different genres and forms of traditional culture and has helped preserve them up to the present.

First, the groom needs to ask the hand of his bride-to-be. The groom and the groomsman together with his closest relatives go to the house of the bride; the groom brings the drinks and the bride takes care of the food. As the date has been previously agreed upon, the bride has invited girls from the village to her house. The bride with the girls hide themselves under large woollen shawls and the groom has to pick out the right girl. 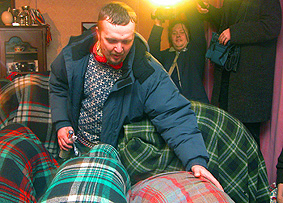 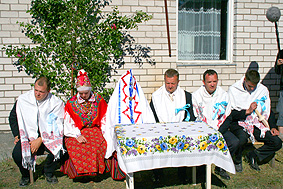 After the groom has succeeded in finding his bride, there follows a party with traditional food and dancing. In case the groom receives a woven belt at the end of the party, his proposal has been accepted. The actual wedding ceremony is usually held the summer after the proposal was made. After the ceremony of proposing the bride prepares her dowry. During the wedding party she has to give a present to all relatives of the groom and to the functional figures of the ceremony (incl. singers and musicians). If she has not managed to make enough knitting or needlework to be distributed, the bride asks other girls for help and every Thursday they gather to work. The girls accompany their knitting with singing, later in the evening young men come to visit for a dancing party. 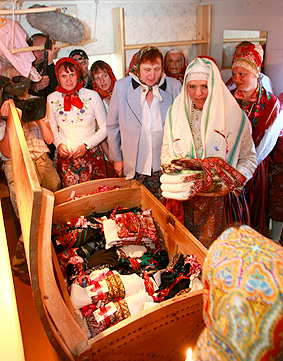 The wedding party of Kihnu unites oral tradition (ancient runo songs, sayings, wishes), ritual practices and handicraft (the dowry); traditionally the celebration is held in two houses: the bride and the groom will have a separate party in their own homes with their own guests and members of their kin. The wedding lasts for three days that are full of old rituals often accompanied by ancient songs: the parting of the bride from her home, the welcoming of the bride in the home of the groom, the opening of the dowry and the distributing of the items of the dowry, the attiring of the bride and the first dances of the bride, the wedding sauna etc. The third day is usually more or less meant for cleaning up and finishing the party. In the first day at the bride’s house her head must be covered with an uig, a long, white headdress decorated with a red snake-like pattern. The uig covers the bride’s head until she arrives at the groom’s home where it is removed with a particular ritual.

All relatives, neighbours and friends are invited to the wedding. Several of the relatives and closer friends are appointed to fulfil certain obligations: young girls take care of feeding the guests, distributing the items of the dowry (and yet have enough time to fill the dance floor); the closest married male relative is given the duty of taking care of the safety of the bride and the groom and is called raudkäsi (The Iron Hand); groomsman is the closest unmarried relative of the groom and he is the supporter and the
advisor of the groom in everything. Although some wedding customs and songs have lost their original significance and others have preserved as forms of amusement, it is most significant that their symbolic meaning has been passed down. Faith in the power of the word and in the effect of ritual, even if subconscious, may preserve longer than the underlying beliefs. They assist the bride in getting accustomed to her new status and family, preparing her for life in a new social role and for the difficulties that she may encounter. The rituals help to find a balance within the individuals involved as well as to
arrange relations within the larger community.