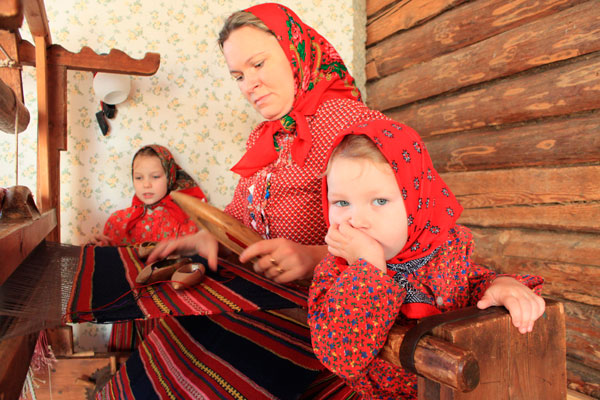 In the cultural space of Kihnu and Manija, the skills of women in handicrafts have always been very highly valued. Handicraft skills were especially important among girls who started preparing their dowry-chest. Mothers and grandmothers have passed down the necessary techniques, patterns and cuts to their daughters from their earliest childhood.

Ülaljõstmisõd, gatherings of girls to knit together through the long winter and spring evenings also played a significant role as a communal working practice that involved traditional crafts as well as active use of various verbal repertoire, particularly singing. The role of women in preserving the culture of Kihnu is especially important since women, unlike men who changed their traditional costumes for more fashionable clothes at the beginning of the 20th century, wear their traditional skirts, jackets, stockings and mittens in their everyday life. Since the clothes of women have a very practical purpose, new clothes are constantly made, changed and improved – they develop together with the people who wear them.

The primary material used in women’s handicrafts is wool. To produce very high quality yarn, every house breeds its own sheep. The women themselves do all the work from shaving the sheep to twining and dyeing the yarn. Wool is the ideal material, especially in harsh winters when heavy snowstorms make life on the islands very hard. Over time, the colours and patterns have undergone slight changes, but the costumes have preserved the general style and original purpose.

The striped skirt came into use in the second half of the nineteenth century, replacing earlier single colour white, grey, black or blue ones, and turned gradually more colourful with the introduction of industrially produced dyestuff. The wealth of the woman has been estimated on the basis of the number of skirts in her possession, which could exceed to twenty home-made skirts. The pattern of stripes and the colours vary according to the age and status of the woman, or depend on the occasion. Children, young girls and women wear skirts where bright red colour prevails. Elderly women generally wear a more modest blue skirt and middle-aged women wear partially red skirts (with one or two wide blue stripes). Black skirt indicates mourning and it is worn after the death of a very close relative: husband, mother, child. The woman mourns her husband longer than her mother or her child. When the husband dies, the woman wears the black skirt at least one year, in case of the death of mother, the mourning period is six months. The skirt, that has only black (dark blue), white, green etc. stripes without the red ones, is also considered to be a mourning skirt, worn in case of the passing of a more distant relative. Such skirt is worn after the period of black skirt, while returning back to normal life after the mourning of one’s mother or child. The stripes indicate that sorrow has gone further. The widow wears this skirt through the rest of her life. In many years some red or pink stripes may be added, but the general impression remains dark. In case of funerals all the women wear black (dark blue) striped skirts with the exception of the closest relative who is dressed  in black. Regardless of the colour of their vertical stripes, the skirts always have one red horizontal band at the bottom hem. Even fully dark black skirts have this stripe, the red line is connected with protective magic against diseases. This Kihnu skirt hierarchy is adhered to even nowadays, although the partially red skirt is now used more widely by elderly women, especially on festive occasions. Married women wear an apron. Until the first half of the nineteenth century these aprons were made of white linen, on festive occasions cotton print was taken into use which nowadays prevails. After giving birth, the mother is allowed to remove the apron until the child is brought to church. When a woman is divorced, she no longer wears an apron on her skirt. Another important element in a woman’s costume is the woven belt. In the past it wasn’t removed even at night as women believed that it propped the body physically as well as in a magical sense. A cotton-print shawl covering the shoulders is also a part of the festive costume. The doublet was made at the beginning of white, later of grey woollen material. Fur coats were made of white sheep and decorated with red straps. In ornaments and embroidery as well as in the whole array of the bride, red is the prevailing colour, as it is considered the colour of youth and mirth in Kihnu culture. Brighter manufactured colours have replaced natural colours over time. Embroidery is the most essential element in women’s blouses and coifs. Until the end of the nineteenth century married women wore a coif every day. Starting form the twentieth century it has been used mainly on festive occasions. In everyday life the coif was replaced by a kerchief which earlier had been used on top of the coif. The kerchief has been the traditional headdress for unmarried women. The loose-end blouse with richly embroidered cuffs, hem at the back and around the collar belong to particularly festive  dress, the more common daily attire includes a cotton print blouse
instead. Historically, Kihnu women always carried a craft-bag along wherever they went. They often knitted while riding or driving
horses. They knitted the whole way when sailing by boat to Pärnu, the nearest town. Usually they made mittens, gloves, stockings and socks. Their fingers traced the patterns and worked automatically even in total darkness, they worked skilfully without any assistance from the eyes. This tradition continues today. The hands of many Kihnu and Manija women are busy with knitting when they wait for a boat, an airplane or follow sheep to pasture. 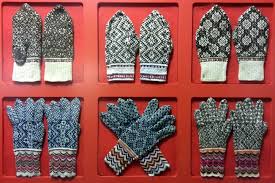 The variety of patterns knitted is rich and varied, while every family has its own system of patterns on their socks and mittens that are easily recognized. In earlier times Kihnu men wore a white shirt made of linen or tow cloth and long grey trousers or white trousers of medium length. The overcoat was either light grey or white. On the doublet the men wore a wide leather belt that had a knife attached to it. The second half of the nineteenth century witnessed the introduction of woollen pullovers, which were most practical for their work in the harsh climate while seal-hunting, fishing or seafaring. Despite men’s general transition to standard modern dress, Kihnu men still like to wear the woollen troi – a hand-knitted and fully patterned
pullover.

The earlier major crafting skills of men revolved around boatbuilding, but involved also fishing and hunting gear as well as
common domestic articles. Making and repairing fishing nets were likewise time consuming tasks. The men’s primary handicraft was woodworking and carving. Hollowed dishes, sinks, bathing barrels and different kinds of furniture were made at home. The  more proficient master craftsmen made violins and even wooden bicycles. Kihnu shipbuilders invented a special boat for seal hunting. It had sledges attached to its bottom for moving in water and on ice.