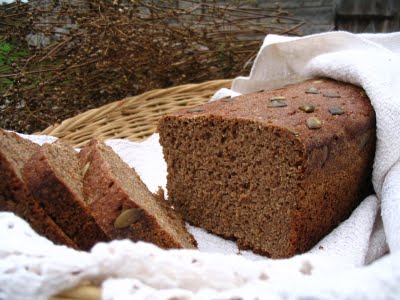 The Kihnu style of cooking is relatively modest, as common to the older peasant diet in this geographic area in general. Cooked potatoes with steamed little Baltic herrings on them is a typical daily dish. Black bread is a common and basic food in all Baltic countries, Finland and Sweden. Nowadays most food products are transported from the mainland to Kihnu, different sorts of bread among other food. However, Kihnu people still prefer to eat their home-baked dark bread. For this purpose, every family cultivates their own plot, sows rye, grows it, harvests and dries the grain, grinds it into flour and finally women bake very tasty bread. To keep it fresh for a long time, they add some potatoes, sometimes little pieces of fat pork or little Baltic herrings. Women often leave bread in the oven overnight. It turns into a slightly smoked product that has become sweet. Such a simple thing as home-made bread is also a part of the Kihnu lifestyle and helps to support the identity of the islanders.

In spring when mergansers (half-domesticated water birds) nest,
the islanders set up barrels on sticks for them. Merganser eggs
with dark-yellow yolks are a favourite food of the islanders of Kihnu
and Manija. Very delicious cake is made from those eggs.
One particular ritual food is cooked by men only. In midsummer when the eel-fishing season begins, the men gather for eel soup. One of the men is appointed to be the cook and he makes a big cauldron of fat soup consisting only of onions, plenty
of eels, water and salt. The best cooks of the island were invited to be the general cook for weddings. They had to take care of feeding wedding guests whose numbers could reach hundreds (finding helpers, however, and consequently bearers of tradition among girls officially attending to the wedding). One obligatory at weddings has been sweet milk soup, which was the last in the menu (traditionally on the third day) and was a sign to finish a continuous celebration. After completing the work, the cook was presented with gifts and a special dance.